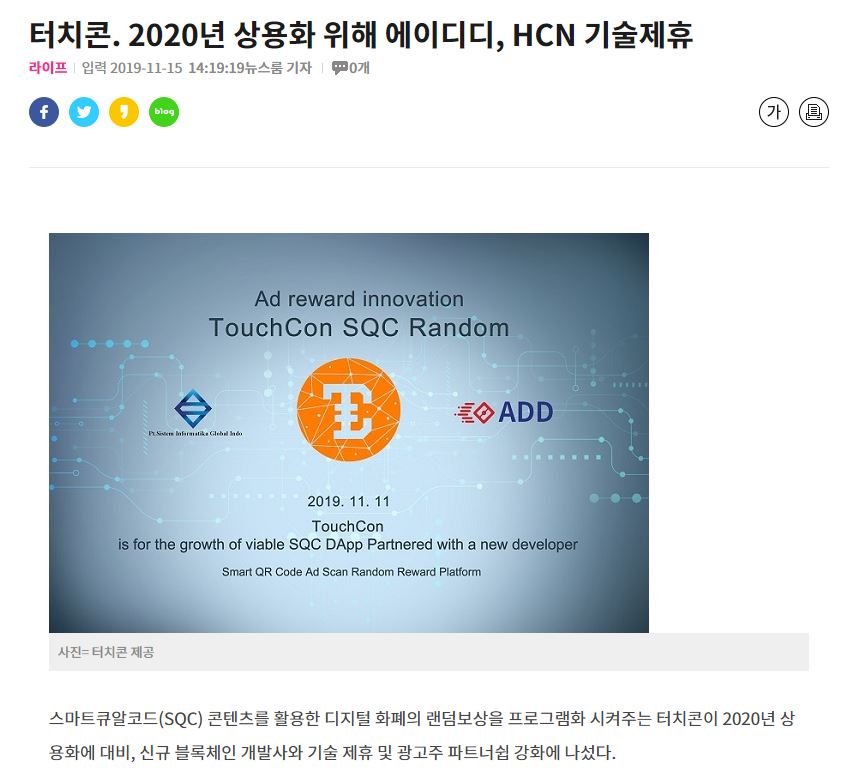 TouchCon. ADD and HCN technical partnership for commercialization in 2020

TouchCon was developed based on Ethereum in 2018 and aimed at real-time application of random scanning of advertisements.
As the beta app is released in late 2019, the need for scalability is increased, and the current platform is being modified.

SQC contents are aimed at spreading the credibility of digital money and active participation of consumers through random
compensation aimed at decentralization for a large number of unspecified advertisers composed of TouchCon Advertiser
Allience(TAA). The company has established extensive advertising agreements and alliances for advertisers. It is known that
the number is gradually increasing, with about 30 small and medium companies confirmed their participation.

According to Foundation officials, we expect at least 100 advertisers to use SQC content next year by 2020, which will open the
era of more practical and active advertising scan random compensation platform.

In particular, the TouchCon Foundation newly recruited ADD, a marketing company specializing in DApps, to develop random
rewards for various advertisers for the scalability of TOC DApp in 2020, and established the Korea Blockchain Research Institute
to complete the mid / long-term Mainnet. It is known that he has entered into a full-scale development partnership with HCN.

Meanwhile, TouchCon implemented the ERC20 Token Swap for a wide range of advertisement scan random compensation
covering O2O and the development of mid- to long-term Mainnet that expands to the ecosystem, and the industry's attention has
already been focused on how the rapid movement of TouchCon will be implemented in 2020. It is becoming.

Your response has been received